"Own only what you can carry with you, know language, know countries, know people. Let your memory be your travel bag." - Alexander Solzhenitsyn –

text and photos by Michael Oz 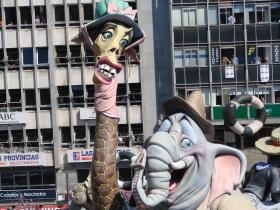 Valencia’s Las Fallas: A Fire to The Sky or Real Spanish Fiesta

The Spanish city Valencia builds hundreds of huge, beatiful statues each March for its Las Fallas festival—then torches all but one in a single night.

March 15-20, 2009. The Fallas is the biggest annual Valencian celebration. It is a world famous street party, a spectacular celebration of Valencian 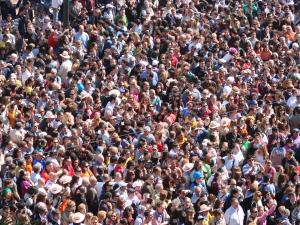 tradition for the locals and an enormous cosmopolitan festival for the visitors. During the year, over 350 Valencian communities (also called "fallas") construct huge colourful fallas-sculptures made of wood and papier-mache.

This year there were 766 fallas. What is Las Fallas? The Las Fallas Festival, which takes place every March, dates back five hundreds of years. It supposedly originated with a grand feast that the carpenters of Valencia would hold in honor of their patron saint, Saint Joseph, on March 19.

The fallas are usually satirical in content and often elaborate works of art, some as high as 25 metres. Or from 6 feet to more than seven stories tall. On the 15th of March the fallas get planted throughout the city and Valencia explodes with the party.

Millions of petards are set to

explode, there are state-of-the-art fireworks twice a day and a buzzing nightlife complete with mobile discos and concerts. For the next four days the entire city takes to the streets to walk around and enjoy the fallas-sculptures.

The fallas-communities themselves break out nomadic camps on the streets and cook paella on the pavement.  In addition to the fallas sculptures, each neighborhood also elects a Fallera Mayor (or Fallas Queen) and a Fallera Infantil (the children's equivalent) to represent their area of Valencia. These falleras, along with their court, spend the festival dressed in elaborate, 18th century-style dresses typical of their area of Valencia. Young Valencian girls participate in Las Fallas parades.

On every street you walk, there is a parade of the locals in traditional costumes and with music bands. Every evening there is a colourful carnival in the central square of the city, with a different theme every night. On 16th it is the folkloric carnival. On 17th and 18th it is the Offer of the Flowers – a wooden silhouette of the Virgin in the plaza de la 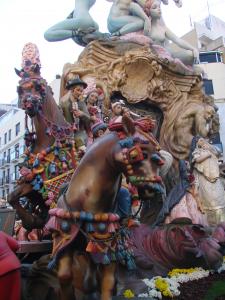 Virgin is filled in with carnations, brought by traditional parades in full colours and music. On 19th it is the Carnival of Fire.

The whole city walks the streets by day and by night Valencia turns into a mega street party with concerts and discos on every square, accompanied by an all-out war of petards and fireworks. Finally, on the night of 19th of March, all the Fallas-Sculptures get 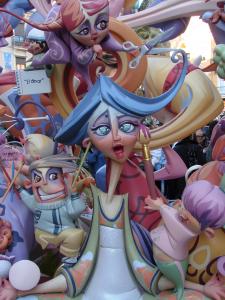 simultaneously burned to the cheers of the crowd. Thus is commemorated the coming of spring.

A brief intro to Valencia

Valencia is a Mediterranean city on the eastern coast of Spain that has about a million inhabitants, making it the third largest city in the country.

While perhaps not yet a household name for many tourists, Valencia is the birthplace of paella, arguably one of the most popular dishes in Spanish cuisine.

It also gained popularity in 2007 as the host of the 32nd America's Cup.

Travelers who have made it to Valencia know the city has much to offer: a historic center, several galleries and restaurants, numerous museums, cultural festivals.

Another draw has been the futuristic City of Arts and Sciences, designed by world-renowned Spanish architect Santiago Calatrava.

What to See and What To Hear

The Fallas. With more than 700 fallas erected throughout the city, you won’t be able to see them all, but you can get a map to find the largest ones. The best time for a close look is in the early morning, when the city is still recovering from the previous night’s festivities. After dark, though, is when they are the most beautiful.

The Mascletà in the Plaça de l'Ajuntament (daily). A coordinated display of firecrackers and fireworks that takes place everyday during the festival at 2 p.m.“The Fallas Festival is not only a dazzling festival declared more than 40 years ago such as “Fiesta of International Tourist Interest”. Las Fallas is an event that involves thousands of people and a whole city with preparations all year long”.A thunderous daytime display based on the most powerful fireworks currently available: the "mascletà".

The mascletà itself is like a concert of gunpowder: pyrotechnicians -- (every time they use around 130 kilo of gunpowder) --carefully study the rhythm of firework sequences, launches and whistles, combining them in a spectacular crescendo that concludes with the "terremoto" (earthquake): hundreds of “masclets” exploding on the ground simultaneously. All of this happens in barely six or seven minutes. There is no fireworks display comparable to a “mascletà” and the emotions it arouses can only be understood by experiencing it at least once. The City Council of Valencia organizes a calendar of 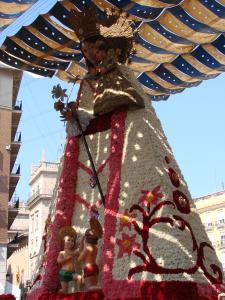 "mascletaes" from the 1st of March to St. Joseph’s Day (19th March), at the Plaza del Ayuntamiento, the city's urban centre. At 2 o' clock in the afternoon, thousands and thousands of people congregate there, every day, to witness a unique event that should not be missed by anyone who plans to experience the genuine Fallas atmosphere.

Over two days, thousands of falleros walk to Plaça de la Virgen to make a floral offering to Valencia’s patron saint, Our Lady of the Forsaken. The greatest expression of religious devotion in the whole Fallas Fiesta calendar, with an elegance, grandeur and visual impact that is rarely surpassed.

This is what is known as the "Ofrenda de Flores a la Virgen de los Desamparados", a floral offering to the Kingdom of Valencia's patron saint, Our Lady of the Forsaken. All the Fallas Committees take part in this event, decked out in their finest, to present their bouquets of flowers to the enormous image of the Virgin which stands in the centre of the plaza named after her, overlooked by her Basilica.

A parade of thousands upon thousands of “Falleras” and “Falleros” fills the city streets, wearing regional costumes and adding to the visual charm with the colours of the flowers. Each Committee brings its own music band and, in some cases, a spectacular basket with the most original and creative floral decorations. Because of their incredible numbers of participants, the Offering is held on two days (17th and 18th March) and, for many reasons, it has now become the Fallas week's central event.

The Cabalgata de Fuego, or Fire Parade (March 19). As its name says, the Cabalgata de Fuego is a moving celebration of fire ceremonies from around the world. The Cremà (March 19). By far, the most amazing part of the Nit de Foc. Starting at 10 p.m. on the last night of festival, the fallas are set on fire in a dramatic display of fireworks and music.

Intricate sculptures can be found throughout Valencia during the Las Fallas festival. Valencia is a land of pyrotechnics. There is barely an event held in this region, whether public or private, a popular celebration or a simple family meeting, that isn't accompanied by the noise and smell of gunpowder.

The Fallas, as the prime example of a popular Valencian fiesta, has a highly varied programme of fireworks displays: from daytime "mascletàs" (see the section referring to them) to ever-more creative and exciting pyrotechnical shows taking place at night, starting from the 15th March, in the old Turia riverbed; specifically, between the 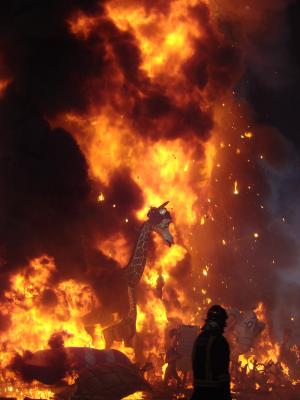 The most spectacular and best-known of all these is the "Nit del Foc" (literally "Night of Fire"), the best example of the intensity that can be reached combining light, colour and explosions.

This tremendous pyrotechnical festival takes place on the night between the 18th and the 19th March and acts as a preamble to the main day of the Fallas.

I probably never would have heard of the Las Fallas festival in Valencia, Spain, if someday my friends from Tourist office of Spain - Teresa, Patricia, Wasy - invited "Vacation Magazine" to participate in this Fiesta.

They said I absolutely had to plan trip around the time of Las Fallas because it was an unbelievable experience. In Spanish - La experiencia increible. They were right. It's a must see event.

Then torches all but one in a single night >>