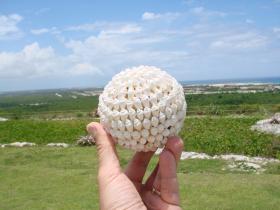 Punta Espada, whose back nine holes opened in July, represents the first of three Jack Nicklaus Signature Golf Courses that will be built at Cap Cana and was constructied at an estimated cost of $18 million. Cap Cana is a luxury destination and real estate development that entailed an initial investment of about $1.5 billion for the completion of its first phase. The project covers 120 million square meters (46 square miles) of exquisite beaches, rocky coastline and unrivaled views of the Caribbean Sea. Punta Espada Golf Club, the first of three Jack Nicklaus Signature Golf Courses to open in Cap Cana, opened for play in November 2006, and only a few months later appeared in international Top-100 lists. It is now ranked by Golfweek as the No. 1 course in the Caribbean and Mexico.

The par-72 course incorporates the surrounding natural beauty of Cap Cana, stretching along a coastline where golfers on each hole look out into the blue expanse of the Caribbean Sea. The Cap Cana Championship is part of the Champions Tour's “The Road to the Charles Schwab Cup”, a season-long points race that kicks off in Hawaii with 25 official events and culminates in Northern California at Sonoma Golf Club October 26 – November 1, with $2.1 million in payouts awarded to the season’s top five leading performers.

Located on the eastern tip of the Dominican Republic, just seven minutes away from the Punta Cana International Airport, Cap Cana is an exclusive, luxurious tourism and real estate community known for its ambitious dimensions, impeccable array of services and amenities and incomparable architectural design that blends perfectly with its surrounding beauty. Currently, Cap Cana is home to the Punta Espada Golf Course, designed by Jack Nicklaus and operated by Troon Golf; headquarters to the PGA Tours Champion's Tour since 2008 and listed by Golfweek as the number one course in the Caribbean and Mexico. Its second golf course, "Las Iguanas" is 70% complete, and is due to open by the end this year.

Cap Cana's Marina is fully operational, and has boat slips available for yachts up to 150 feet, surrounded by elegant shops and gourmet restaurants. Cap Cana also offers world class spas, exclusive memberships to exquisite clubs, a wide variety of activities and amenities, and an educational district which includes the leading bilingual Cap Cana Heritage School. Cap Cana is rich with five star accommodations available for its visitors - including the Sanctuary Cap Cana Golf & Spa hotel with 176 suites, a luxurious boutique hotel, world renowned Caleton Villas, as well as hundreds of condominium units and villas already finished and available to rent. The infrastructure of basic services at Cap Cana presently has 20MW of installed power, nearly 30 miles of paved roads, and 13 miles more in the process of completion. Cap Cana's property is also equipped with modern water, irrigation, and sanitation grids, along with a cutting edge telecommunications network. Please visit www.capcana.com for more information.