“Travel is fatal to prejudice, bigotry, and narrow-mindedness.” - Mark Twain

Cabo del Sol. One & Only Pamilla 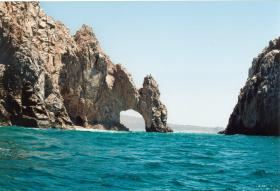 The Ocean Course at Cabo del Sol has been called one of the five most beautiful in the world. A Jack Nicklaus signature course, this spectacular masterpiece is referred to as "the Pebble Beach of Baja," and features seven holes on the Sea of CortИs. Cabo del Sol skirts the shore of the Sea of CortИs, and is situated at Playa Barco Varado, about halfway between San Jose del Cabo and Cabo San Lucas. Ranked among the "Top 100 Courses in the World" by Golf Magazine, the course was host to the 1996 Shell Wonderful World of Golf and the 1995 and 1998 SENIOR PGA TOUR Senior Slam.

The Palmilla Golf Club was also designed by Jack Nicklaus, offering golfers spectacular views of the Sea of CortХz from nearly every hole as it winds through centuries old cardon cacti and rugged desert mountain terrain, making each hole a memorable experience for golfers of every skill level. The course is divided into the Arroyo Nine, the Mountain Nine and the Ocean Nine. The five sets of staggered tee boxes ensure golfers, from beginners to professionals, an exciting game.

Cabo Real is an 18-hole, par 72 championship layout located by the beach, designed by Robert Trent Jones, Jr. It plays 6,945 yards and is definitely not for short hitters. Almost every hole has a wonderful view of the Sea of CortИs, with the 15th right on the beach. With four tees per hole, the course provides plenty of hardships for the low-handicap player, yet can be fun for the average golfer.

The Cabo San Lucas Country Club offers a challenging Par 72, 18-hole course designed by Pete Dye. With an idyllic setting overlooking Land's End, this magnificent course features waste deep bunkers, subtle terracing, and a 607-yard par five (the longest golf hole in Mexico). Dye said the 72-par course is a challenge for golfers on all levels, because with the multiple tee boxes, it can range from a very short course to a rather challenging one with enough hazards, obstacles and bunkers to make it interesting. Golf has quickly become a major attraction here. Where else can you catch a marlin in the morning, play eighteen holes, and still be home by early afternoon?