“A good traveler has no fixed plans and is not intent on arriving.” - Lao Tzu 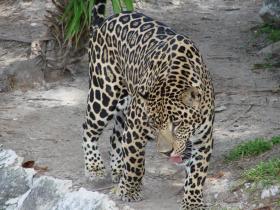 Legal Status: The U.S. Fish & Wildlife Service lists the jaguar as Endangered. They are listed by CITES as Appendix I. Their IUCN rating is Near Threatened. 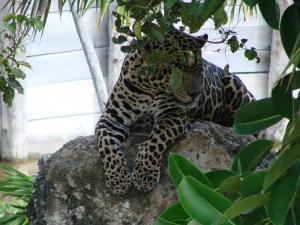 Description: The jaguar is the largest cat in the Americas, with adult males of the larger subspecies (e.g. Panthera onca paraguayensis) that may exceed 300 lbs. Jaguars living in heavily forested areas are considerably smaller than those populations from more open areas, like the Pantanal of Mato Grosso, in Brazil, and the Llanos of Venezuela.

It is the only living representative of the genus Panthera found in the New World. Covered by a spotted pattern, its markings differ from that of the leopard by their having larger, broken-edged rosettes that contain small black spots within them. Jaguars have a large head, stocky build and relatively shorter limbs than others of its genus. Melanism is present in some populations.

Range: Historically, jaguars ranged from the southern United States (Texas, Arizona and Mexico) through Central America to Venezuela, the Guianas, Brazil and northern Argentina. Current distribution is in a broad belt from central Mexico through Central America to South America as far south as the northern portion of Argentina. Within that range, only populations in Amazonia, part of Venezuela and the Guianas are sustaining or increasing.

Habitat: Jaguars swim well and are strongly associated with water. Favored habitats include rain forest and seasonally flooded swamp areas. They are also found in lesser numbers in thorn scrub woodland and dry deciduous forest. Jaguars have been found at elevations as high as 3,800 meters in Costa Rica but typically avoid montane forest and have not been found in the high plateau of central Mexico or above 2,700 meters in the Andes. 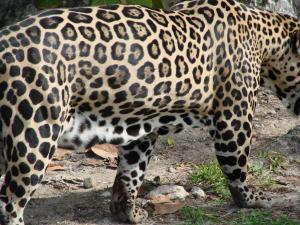 Diet: Over 85 species have been recorded in the jaguar's diet. Large prey such as peccary, deer, tapir and capybara are favored but they will eat almost anything that can be caught. In areas where cattle ranching is widespread, domestic livestock may become the most frequently targeted prey species.

Jaguars are the only big cat which regularly kills prey (especially capybaras) by piercing the skull with their canines. It is suggested that the massive head and stout canines are an adaptation to "cracking open" well-armored reptilian prey such as land tortoises and river turtles.

Their ability to survive the great Pleistocene extinction that saw the disappearance of many large ungulates and their predators may be related to the jaguars's ability to take advantage of a formerly super-abundant prey base of aquatic reptiles (turtles, caimans and snakes).

Social Organization: Jaguars are solitary, territorial carnivores. The territories of males are larger than those of females, and may overlap those of several females. After a gestation of about 101 days, females give birth to 1-4 cubs (average 2) which will become independent in 1.5-2 years. Males are sexually mature in 3-4 years, females in 2-3 years. In captivity, jaguars are probably the longest lived of any species of cat, with a few individuals exceeding 30 years of age.

Threats to Survival: Although once heavily hunted for their skins, this threat has declined drastically since the mid-1970's when anti-fur campaigns reduced the popularity of coats made from spotted cats and CITES controls progressively shut down international markets. Today most populations are threatened by high deforestation rates which fragments jaguar populations and makes them more vulnerable to continuing persecution by man. Regardless of legal protection, jaguars are often shot on sight, especially in areas possessing cattle ranches.

Because jaguars consume a large amount of cattle in their diet (when cattle are abundant), some farmers employ hunters to pursue local jaguars and today such conflict is the most urgent conservation issue facing this species. Translocation of problem-animals has been attempted in Brazil and Venezuela, with inconclusive result to date. Attempts to relocate problem individuals in Belize found that jaguars often return to stock killing. 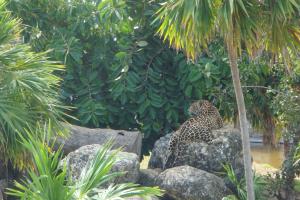 Zoo Programs - SSP: The AZA Jaguar Species Survival Plan (SSP) encourages and supports conservation and education projects that promote the survival of the jaguar in nature. Until recently, jaguars in North American zoo collections were largely of unknown origin but recently, wild-born individuals from Peru and Venezuela have been acquired.

A separate genetic line from Mexico has also been imported and ultimately the SSP hopes to possess only jaguars that can be totally traced to some part of their natural range.

It is not the goal of the SSP to focus on a single subspecies of jaguar because of the relative abundance of some populations, especially in Amazonia, and because it appears likely that additional founders from range countries will be periodically available for years to come. The SSP's target population for the North American zoo population is 120 individuals.

Conservation: Jaguars are difficult to study in the field but research in the Pantanal of southern Brazil, the llanos of central Venezuela and in the Cockscomb Mountains of Belize have shed light on many aspects of their behavioral biology. Although true protection is still lacking in most parts of their range, protection in the form of the Cockscomb Basin is unique in setting aside a large tract 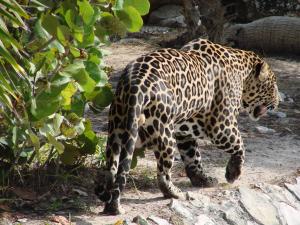 of land specifically for jaguars.