"A ship in harbor is safe -- but that is not what ships are built for." - John A. Shedd 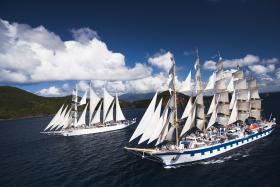 Tall ship sailing specialist Star Clippers has announced that it has started building a fourth ship to add to its fleet of graceful square-riggers; its first new-build since the launch of Royal Clipper in July 2000. The new vessel, yet to be named, will be the biggest and most ambitious project to date and will be launched in the second half of 2017, carrying 300 passengers, measuring 8,770 tons and powered by more than 6,350 square meters of sails.

The new ship will technically be a five-masted, square-rigged barque. While the company's flagship Royal Clipper is modelled on the legendary German sailing ship Preussen, the new member of the fleet will be a near-replica of the even more impressive France II, commissioned in 1911 and the largest square rigger ever built. Just as the original France II eclipsed Preussen more than a century ago as the world's largest square rigger, the Star Clippers newbuild will replace its sister, Royal Clipper, as the largest ship of its kind afloat today.

Mikael Krafft, founder and owner of Star Clippers, says: "We have already built the five-masted full ship Royal Clipper, which is very much influenced by the Preussen. This time, we intend to build a ship inspired by France II, an ambition I have had for a long time. The ship's rig will be identical to France II and dimensions will be very similar, although we have added various features that will make this the most magnificent passenger sailing ship afloat."

As well as the generous deck space only found on a sailing ship, the new vessel will have three pools, one that funnels sunlight through the ship's atrium into the elegantly appointed dining room. There will be a watersports platform in the stern for use when the ship is at anchor and a variety of cabin grades, including 34 suites with balconies and four luxurious owner's suites. A restaurant in the light-filled atrium will accommodate all passengers for open-seating dining.

Regular guests will be delighted to discover their favorite hallmarks of all Star Clippers ships, such as the cozy library, the bowsprit net and the popular, al fresco Tropical Bar, where evening entertainment takes place. While the ship will have ecologically sound, high-tech engines, it will, like its sisters, rely on wind power and its sails wherever possible. The new ship will be delivered in the second half of 2017 and will initially sail the company's most popular itineraries in the Mediterranean and the Caribbean. Sales are expected to open in 2016. 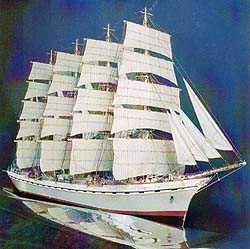 Cabins: 150 cabins including 34 suites with balconies plus four owner's cabins.

Star Clippers operates three of the world's largest and tallest sailing vessels. Visiting ports often untouched by larger cruise ships and offering passengers the activities, amenities and atmosphere of a private yacht, Star Clippers is recognized as one of the premier specialty cruise lines. Passengers can enjoy the romance of sailing on board a true tall ship in a relaxed atmosphere with high standards of service provided by an attentive crew.

All three ships have expansive teak decks, swimming pools, informal dining, a convivial Tropical Bar on deck and a comfortable piano bar and are large enough to offer first class accommodation and dining, but small enough to call into intimate ports, untouched by large cruise ships.

Star Clippers was founded in 1989 by Swedish entrepreneur and classic boat connoisseur, Mikael Krafft, initially operating two identical four-masted barquentines, Star Flyer, which set sail in 1991 and her twin, Star Clipper, launched in 1992. At 115.5 m long, with 3.365 m² of sails apiece, and carrying up to 170 passengers and 74 crew, both are modern, high-tech, re-creations of the classic clipper sailing ships that dominated the oceans of the world in the 19th century.

The vessels were the first sailing clippers to be built since 1910 and heralded a renaissance of a golden age of sail. In 2000, Krafft added a third vessel, Royal Clipper, a fully square-rigged vessel with 42 sails. Royal Clipper holds the Guinness World Record as being the biggest five-masted ship in the world.