“Travel is fatal to prejudice, bigotry, and narrow-mindedness.” - Mark Twain 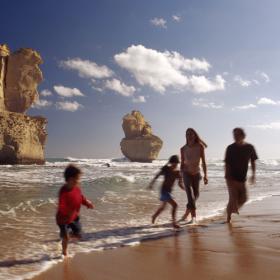 The two reptiles, a white-lipped and a tiger snake, darted out of our way as soon as they spotted us coming down the trail. The lone Frenchman lingered a little longer, stopping for a chat and some fresh pineapple before disappearing into the woods. My fear of snakes — a robust one — is eclipsed by my distaste for crowded hiking trails, which the 65-mile-long Great Ocean Walk is not.

A path through a national park this picturesque in the States would be as packed as Michigan Avenue on Black Friday. But on this coastal walking track near Melbourne, people are in short supply — at least on the trail. Traffic levels pick up on the nearby Great Ocean Road, a scenic drive that hugs steep cliffs and serpentines through mountains and rain forest. Built by returning servicemen shortly after World War I, this antipodean version of California’s Big Sur highway long has been a popular tourist attraction Down Under. The Great Ocean Walk, however, is a more recent development.

Only five years old, the well-marked path takes trekkers from the sleepy surf town of Apollo Bay to the doorstep of the Twelve Apostles, a series of tall rock formations standing like limestone soldiers in the Southern Ocean. Hikers meander through forests of eucalyptus trees dotted with fuzzy koalas, along remote beaches strewn with ribbons of giant kelp and Neptune’s necklace — not to mention the occasional corpses of penguins who couldn’t handle the ocean’s rough churn. While walking, you breathe in the crisp air blowing up from Antarctica. Hear the roar of the surf that sent dozens of ships smashing into these formidable rocks. See things you’d miss if you were stuck behind a steering wheel — especially if you’re an American trying to remember to drive on the left side of the road. Hikers can tackle the Great Ocean Walk in several ways.

Some, like a hardy German couple we encountered, haul their own gear from campsite to campsite. Others go on short day hikes or longer guided tours, staying at inns and B&Bs near the trail. I hooked up with a gregarious group of six middle-aged Australian women earlier this month and based myself at Bothfeet, an eco-lodge conveniently at the trail’s midpoint. Bothfeet provides all of your meals and just about everything you need to hike — a jacket, day pack, trekking poles — except boots.

Our days usually started around 7:30 a.m. with a wake-up call from kookaburra birds. After breakfast, we’d load our day packs with a thermos of tea and a gourmet salad lunch and pile into the van for a ride to wherever we left off hiking the day before. (It generally takes six days to do the entire walk, but shorter options are available.) Bothfeet is owned by the young husband and wife team of Dana and Gavin Ronan, an Aussie whose family used to run a mineral water export business out of north suburban Libertyville. Bothfeet is a small, family-run operation, the kind of place where hiking guides help clear the table and refill the wine glasses.

The chef, originally from Vietnam, often doubles as shuttle driver and housekeeper in between whipping up delicious dinners of salmon, lamb and creme brulee. Accommodating only 10 people, the secluded lodge is set in a rain forest near Johanna Beach, where American surfer Kelly Slater won the Rip Curl Pro last April. The two-year-old property feels like a cousin of Mies van der Rohe’s Farnsworth House. It’s an elegantly simple structure with lots of sliding glass doors that make the most of the natural surroundings.

The lodge’s most popular feature can be found on the communal deck: a long bench lined with big foot basins, where we soaked our toes in hot water and rehydrated with pinot noir after each day’s hike. “I can’t wait for that foot spa and wine,” became a familiar refrain during the walk’s hardest day, a 10-mile span of ups and downs that culminated at Wreck Beach. Named for its nasty nautical reputation, Wreck Beach still sports a few rusty anchors from ships that crashed on its shore, including a boat full of tea from China that ran aground in 1869. Most of the Great Ocean Walk isn’t on the beach. It’s in the fern gullies and forests of Great Otway National Park, flanked by dairy farms and rolling fields of grazing sheep and rugged cliffs vanishing into the ocean. Wildlife along the walk included a few cute kangaroos and a rather large wallaby that wasn’t the least bit interested in moving out of our way.

“Do wallabies attack humans?” I asked the Australian ladies, who were lined up behind me — I hoped for no particular reason. “No worries,” one of them answered with Australians’ hallmark nonchalance. “They’ll kill you if they kick you in the chest, but I reckon that doesn’t happen very often.” As exciting as it was to spot wallabies and roos along the Great Ocean Walk, it was even more thrilling to finally see the Twelve Apostles emerge in the distance. After all, epic walks are more satisfying when there’s a big payoff at the finish line. The Inca Trail has Machu Picchu. Spain’s Way of St. James has Santiago Cathedral. And the Great Ocean Walk has the Twelve Apostles.

These tall limestone stacks used to be called the “Sow and Piglets” until someone with a sense of marketing suggested a name change to lure tourists. It worked. More than 1 million people visited the Twelve Apostles last year. Not bad for a country of 22 million. Ages ago, these limestone towers were connected to the cliffs of the mainland. Millions of years of waves and wind have taken their toll; one of the apostles bit the dust in 2005. Likewise, people used to be able to walk from the mainland onto a narrow stretch called London Bridge. Then the center of the natural “bridge” collapsed in 1990, leaving a man and woman stranded on the remaining section. A helicopter had to rescue the couple, who were married. But not to each other. Story goes, the clandestine lovers were less than thrilled to have their high-profile rescue broadcast on the evening news.

The Great Ocean Walk finishes a couple of kilometers from the Twelve Apostles Visitor Center, which meant we had a short drive before we could get an up-close look at the famous rocks. From the trail, we’d seen the growing number of cars filling the visitor center parking lot on this sunny Sunday afternoon. We’d been spoiled by solitude, and no one seemed in a rush to get there. We savored our final few minutes at the desolate trail head by toasting the end of our journey with sparkling wine. A few minutes later, we pulled into the crowded car park and joined the masses.

STAYING THERE: Bothfeet has a variety of packages, from six- and four-day guided hikes to less expensive self-guided options and one-night stays. The four-day guided hike — a popular option — covers 37 miles of the Great Ocean Walk and costs $1,995 a person for adults, $1,595 for children ages 8-14. (Prices are in Australian dollars, which are basically equal to U.S. dollars based on current exchange rates.) The cost covers three nights in the lodge, all meals, walking equipment, guides and transportation to and from Melbourne; bothfeet.com.au.

WHEN TO GO: The best weather for the walk is March-April and October-November. Bothfeet occasionally schedules “women only” six-day walks; get details at bothfeet.com.au/women. The lodge is closed from June-August. FITNESS LEVEL: You don’t need to be an expert hiker to do the walk, but you should be in generally good condition. Most guided walks call for hiking about 10 miles a day. You usually have the option of cutting it short.

Information for this article was gathered on a research trip sponsored by Tourism Victoria.