“There are no foreign lands. It is the traveler only who is foreign.” - Robert Louis Stevenson

The Golden Chariot Itinerary: from Bangalore to Goa 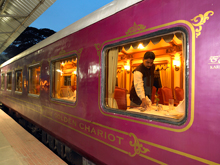 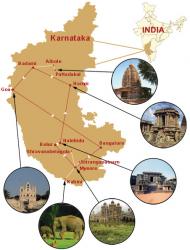 Detailed Itinerary: The land once ridden by formidable armies is now traversed by the world's most unique railway - The Golden Chariot beckons you to discover worlds that are enriched with history and culture.

Recline and relax as the magnificent scenery unfolds outside your window with luxury on the inside, thus far reserved for royalty. We present the Golden Chariot - a fine balance between a glorious yesterday and an omnipresent tomorrow in a magical land... that is Karnataka.

12:00 noon: Check-in at the Leela Palace followed by lunch at Jamawar or Citrus

08:00 pm: Arrival at Yeshwantpur Railway Station, Platform No. 6 Traditional Indian welcome at Railway Station and escorting to respective cabins. Dinner on board The Golden Chariot

11:30 pm: Arrive at Mysore Alternate Itinerary* 11 am onwards: Check in at Our Native Village 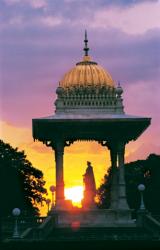 *Optional itinerary for those who do not opt for Leela Palace check-in and Bangalore sight seeing. Bangalore: A World of Opportunity The capital of Karnataka is known as the Garden City because of its salubrious climate and greenery. Perched 3,250 feet above sea level, temperatures seldom exceed 30oC (88oF).

Founded by Kempegowda, a powerful chieftain, the city is unique with its rich cultural heritage that coexists with its modern day technological and industrial achievements. Today Bangalore is popularly known as India's Silicon Valley. Bandipur: Tread the path of the erstwhile Maharaja of Mysore with a visit to Bandipur, about 80km south of Mysore on the Mysore-Ooty Road. The reserve is a playground for wildlife, with elephants taking the lead role.

Be prepared for an unforgettable experience - you might see a tiger prowling amidst the mix of deciduous, evergreen forest and scrubland vegetation. Set against the picturesque backdrop of the enchanting Niligiri mountains with its mist-covered peaks, Bandipur was once the Mysore Maharaja's private hunting ground.

It was brought under Project Tiger in 1973. This is one of the best game sanctuaries in India to observe and photograph wildlife in close proximity. A temple perched atop Himad Gopalaswamy Hill, the highest peak in the Bandipur range, is worth a visit. 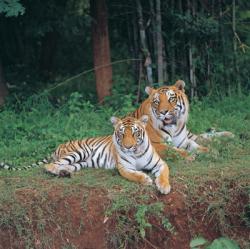 *Optional itinerary for those who do not opt for Kabini / Bandipur tour A minimum of 5 passengers required for Alternate Itinerary Kabini: A World of Wildlife Rajiv Gandhi National Park, Nagarhole (Kabini), the hunting retreat of the Mysore Maharajas, is definitely the perfect destination for wildlife lovers in South India.

The excitement starts with a safari into the heart of the park, where you are sure to spot wild animals in their natural habitat. Some of the popular sightings are elephant, gaur, sambar, chital, wild boar and the more exclusive predators like tiger and leopard. A bird watcher's paradise, the park is home to over 300 species of birds, many of which are endemic to these jungles.

Mysore is a city known for its resplendent palaces and majestic buildings. A visit to the city conjures up visions of the glory, still evident of the illustrious Wodeyar Kings. This former state capital still retains its tradition in music and dance, art and literature and its time-honoured crafts. A 141 kms from Bangalore, the city enchants you with its quaint charm, verdant gardens, tree-lined boulevards and its sacred temples.

Mysore, once the state capital, today is a vibrant city teeming with tourists and visitors. It is known the world over for its exotic sandalwood and rich silks. Many culinary delights await those inclined to sample the regional cuisine. Mysore Palace: Built in Indo-Saracenic style with domes, turrets, arches and colonnades, the Palace is a treasure house of exquisite carvings and works of art from all over the world.

The magnificent jewel -studded golden throne of the Wodeyars is displayed here during the Dasara festival. Srirangapatna: The island fortress of the legendary warrior king Tipu Sultan is just 14 km from Mysore city. Inside the fortress is Tipu's mosque with its twin minarets, the Wellesley Bridge and the dungeons where British officers were once imprisoned. 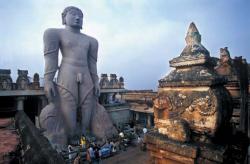 06:00 am: Depart from Mysore to Hassan 08:15 am: Arrive at Hassan 09:00 am: Depart for sightseeing to Shravanabelagola (Please note that you would have to climb close to 700 steps to experience the architectural marvel. Only those who can undertake this are advised to do so.

The Golden Chariot Belur & Halebid : A World of Worship Belur in Hassan district 220 kms from Bangalore and 38 kms from Hassan) is famous for its magnificent Hoysala Temple Complex. The Chennakesava Temple here is the major attraction, built by Hoysala Vishnuvardhana, to commemorate his victory over the Cholas.

The facade of the temple is filled with intricate sculptures with no portion left blank. It is the only Hoysala Temple still in active worship. Halebid in Hassan district is 27 kms away from Hassan and was the capital of the Hoysalas. It has one of the finest Hoysala temples.

The Hoysaleswara Temple, perched on a star-shaped base amidst lawns, is a sculptural extravaganza. Its walls are richly carved with an endless variety of Hindu deities, sages, stylized animals, birds and friezes depicting the life of the Hoysala Kings. Shravanabelagola, 52km from Hassan, is an important Jain pilgrim centre. It is home to Asia's largest monolithic statue Lord Gomateswara here towers 58 ft., looming atop the picturesque Vindhyagiri Hill. Every 12 years, Jain pilgrims gather here to participate in a splendid head-anointing ceremony. 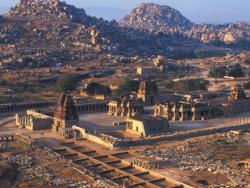 The Golden Chariot Hampi: A World Heritage Site If dreams were made out of stone, it would be Hampi. Hampi has been classified as a World Heritage Center and is one of the major tourist destinations in India. Hampi, the seat of the famed Vijayanagara empire was the capital of the largest empire in post-moghul India, covering several states.

The Vijayanagara empire stretched over at least three states -Karnataka, Maharashtra, and Andhra Pradesh. The destruction of Vijayanagar by marauding Moghul invaders was sudden, shocking and absolute. Although in ruins today, this capital city once boasted riches known far beyond the shores of India.

The ruins of Hampi of the 14th Century lies scattered in about 26 sq. km area, amidst giant boulders and vegetation. Protected by the tempestuous river Tungabhadra in the north and rocky granite ridges on the other three sides, the ruins silently narrate the story of grandeur splendor and fabulous wealth.

The splendid remains of palaces and gateways of the broken city tells a tale of man's infinite talent and power of creativity together with his capacity for senseless destruction. A visit to Hampi is a sojourn into the past. Most of the important structures and ruins are located in two areas, which are generally referred to as the Royal Centre and the Sacred Centre. 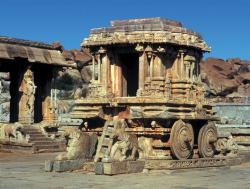 A visit to Anegundi village by traversing the gushing Tunga Badra river on a coracle is an experience that provides the guests with a glimpse into the traditional country life in Karnataka.

The Golden Chariot Reach Goa post midnight Badami: A World Heritage Site Badami is picturesquely situated at the mouth of a ravine between two rocky hills. The exquisite sculptures and the rust red sandstone cliffs of Badami tell many a tale of yore. The first sculptural embellishment to dazzle the eye is the 18 armed Nataraja striking 81 dance poses. 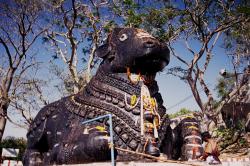 Pattadakal, with its beautifully chiseled temples is a World Heritage Site located on the banks of the Malaprabha River. It bears testimony to the richness of the Chalukyan architecture. Pattadakal reached its pinnacle of glory under the Chalukyan Kings and was once used as a ceremonial center where kings were crowned.

09:30 am: Breakfast on board The Golden Chariot 10:00 am: Depart for sightseeing 11:00 am: Visit the famous churches of old Goa 12:15 pm: Visit an old Portuguese house: Sola Souto Maior for tea/coffee and cookies;

Depart for Bangalore Goa: A World of Golden Beaches Also known as "Pearl of the Orient" and a "Tourist Paradise", the state of Goa is located on the western coast of India in the coastal belt known as Konkan. The magnificent scenic beauty and the architectural splendors of its temples, churches and old houses have made Goa a firm favorite with travelers around the world. But then, Goa is much more than just beaches and sea.

It has a soul which goes deep into unique history, rich culture and some of the prettiest natural scenery that India has to offer. Besides the natural beauty, the fabulous beaches and sunshine, travellers to Goa love the laid-back, peaceful, warm and friendly nature of the Goan people. After all, more than anywhere else on planet earth, this is a place where people really know how to relax. 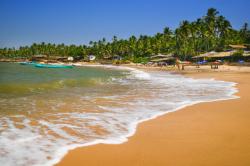 08:00 to 09:30 am: Breakfast onboard The Golden Chariot 11:00 am: Reach Yeswanthpur railway station, farewell by the entire crew.