"Own only what you can carry with you, know language, know countries, know people. Let your memory be your travel bag." - Alexander Solzhenitsyn – 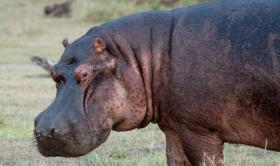 Tanzania isn’t just conquering Kilimanjaro and khaki camps on the Serengeti. How about a luxury safari near Ngorongoro or a private island sojourn in the Zanzibar Archipelago?

Metres from where we sit sipping a cool drink, the foliage shivers. There’s more movement – and surprisingly little sound – before a massive elephant surges through the branches, flapping its big lotus-leaf ears, thrillingly huge and close. Fortunately, we’re seated comfortably on the deck of a sturdily stylish treehouse, just along from a sensuous outdoor shower, its taps tied with ribbon to stop the monkeys from turning them on. 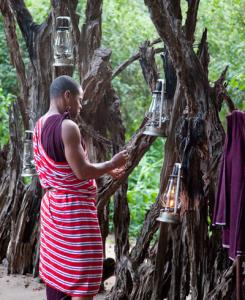 Such are the pleasures and surprises of both the unfenced luxury of Lake Manyara Tree Lodge – and the safari experience generally – in Tanzania’s Lake Manyara National Park. The lodge is the only one in the park, so while there is no million-beast migration here, nor are there any other vehicles to interrupt an appreciation of the massive, muscled shoulders and powerful paws of the lions, or the quiet of first light. And the lodge’s vehicles are the only open 4WDs in the area, so there’s nothing between you and the view.

Though not a huge park, Lake Manyara is blessed with a variety of habitats, so there’s a short pre-dawn drive through acacias silhouetted against a pale sky, and then sunrise over the open lake and savannah. The reverse view is of yellow-green fever trees glowing in the early sunlight and the Great Rift Valley escarpment brooding above. In nearby woodland, a pod of hippos has already settled into their mud spa for the day, shiny lumps with twitchy ears.

The hippo homeliness is balanced out by psychedelic giraffes craning above dazzling zebras. After a few days you get a feel for the rhythm of the country, as animals move from the woodland to the open and back (the game in the day stay mainly on the plain), and the surprises continue with a good variety of wildlife, both large and small; from klipspringers (sassy Bambis) and trotting families of warthogs (or “wartpigs” as our Spanish fellow adventurers exclaim) to swift and slinky mongoose. However, the local tree-climbing lions prove elusive. Lake Manyara is also birdwatching heaven.

Along with the shimmering crust of thousands of pink flamingos along the lake’s edge, there are Eurasian bee-eaters super-bright in the sunlight, and fabulously named pangani longclaws, ashy starlings and red-tailed shrikes. Colour isn’t just the preserve of birds, though, even if taste may be: a bizarrely bright lizard looks as though it can’t quite believe it has stepped out in an orange hood and electric-blue bodysuit. The lodge is owned by &Beyond, a group renowned for its luxury properties throughout Africa and whose triple bottom line might read, “conservation, community involvement and extreme comfort”. All the staff at the lodge are Tanzanian, most from nearby villages. Many have worked with the company for years – which shows in their extraordinary service, attention to detail and easy competence.

As with all of &Beyond’s properties, along with assistance in building and provision of utilities, the lodge works with the local communities to create sustainable income so villages can benefit from conservation rather than hunting and felling trees. This carbon offset-type approach to travel is increasingly the clincher for those booking a high-end safari. That and the cocooning comfort. Here, a pool and 10 treehouse suites are set peacefully and privately down sandy paths in a mahogany forest. Appealing interiors feature simply stylish open-plan living, sleeping and bathing spaces, with banana bark and palm thatch above, wide teak boards underfoot, and soothing natural tones in between. There’s a freestanding tub – already filled by the butler for a soak after the long arrival drive – and a wall of gauzed windows and doors that lead to the deck and on to the jungle beyond. The lodge itself is a split-level affair, with atmospheric lounge/bar combining African carvings, old photographs and leather-bound books with wi-fi, and there’s an airy kitchen/lunch deck. Dinner is served in the large open-air boma (a theatrical take on a traditional Maasai enclosure), which is artfully lit by firelight and surrounded by upright lake-worn logs and old rough-hewn dugout canoes. Meals are creative and usually highlighted with excellent breads from the restaurant’s tandoor oven. Surprises are everywhere.

On the other side of the Rift Valley escarpment is the Ngorongoro Crater Lodge, set dramatically right on the rim of an ancient volcano crater. Its wide-angle view is like an ever-changing watercolour as the grassy slopes, crater floor and lakes are coloured by clouds, mist and sun. More than 60,000 predominantly Maasai live in the general Ngorongoro Conservation Area, along with their livestock. On the way to the crater floor, there is a village that can be visited, and in the early mornings the occasional striking Maasai figure in red can be seen crossing the grassy slopes. The crater is a hugely popular safari site, attracting hundreds of vehicles daily, and Ngorongoro Crater Lodge’s guides are accordingly savvy in their driving and commentary. Entertaining anecdotes refer to “lion sausages” (warthogs) and “spare parts” (wildebeest, because they look as if they’re made from bits of other animals).

Ngorongoro Crater is chock-full of wildlife, almost like an open-plan mega-zoo, so there are plenty of close encounters of the herd kind: Thomson’s gazelles, zebras and wildebeest (looking venerable with their beards lit by the pale morning sunshine). It also boasts rare black rhinos standing monumental on the plain, and male elephants, including the enormous Babu (Swahili for grandpa), who is in his 50s.

Ostriches, kori bustards and augur buzzards put in appearances, along with rosy-throated longclaws and striking grey-crowned cranes puffed up in their courtship dance. The open setting is attractive and, as at Lake Manyara, there is the ravishing visual of a dazzle of zebra, a blur of pink flamingos, silvery lakes and dramatic escarpment. But there can also be quite a scrum of vehicles around some striding cheetah or lolling lion. Visitors are always hopeful of a kill and when word goes out over the radio that some lions are close to the road and possibly about to stalk, jeeps converge in a traffic jam that’s four vehicles wide and 20 long. The lions, completely unbothered, wander between the 4WDs and rest in their shade. Cool cats.

After a happily long safari, it’s back to the lodge for a bath, reached via a path of deep-red rose petals. Nothing is de trop at Ngorongoro Crater Lodge, where the decorative style is often referred to as “Maasai meets Versailles”. The whole creation is an extraordinary whimsy underpinned by extreme luxury. The exteriors were inspired by the Maasai mud-and-stick manyatta (house) and feature stilts and turrets and makuti (palm frond) roofs. The interiors are a many-layered fantasy of colour and texture, incorporating raw plaster and exotic carving as well as European wood-panelling to create a cosy corner complete with leather armchairs, sherry tray and knee rugs in front of a fireplace. 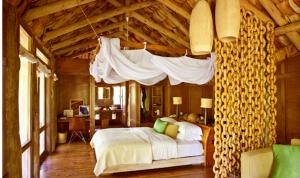 It does get chilly at this altitude. There are chandeliers hanging from the thatched ceilings and rich waterfalls of silk drapes. The exercise in contrast continues with the many floor-to-ceiling windows framing the natural beauty of the huge sky and crater below, which can be seen even from the bath. The lodge comprises 30 suites separated into three groupings to keep things intimate, so each camp has its own opulent lounge and dining rooms, and viewing decks. Logistic nightmare, you’d think, but it runs like clockwork, with 38 kitchen staff producing quite sophisticated multi-course lunches and dinners. While North and South Camps’ sitting/dining rooms are similarly richly upholstered and quite formal, Tree Camp’s is built around an ancient tree and is more worn-colonial, with elegantly simple wooden tables and chairs. It hints of adventure and exotic Zanzibar. Here also, &Beyond assists and involves the community with local initiatives such as mosquito net distribution, tree planting and conservation lessons for schoolchildren.

The lodge also has a shop featuring African jewellery and carvings. After days of bouncing around in jeeps, it’s time to wash off the dust in the limpid waters of the Indian Ocean at offshore Zanzibar (Tanganyika united with Zanzibar in 1964 to form Tanzania). Off the north-eastern tip of Zanzibar’s main island lies private Mnemba Island, a beach-chic luxury paradise occupied solely by a maximum of 20 guests plus staff. From the moment you step off the little boat into the insanely aquamarine shallows of the island (there isn’t a jetty), it’s no shoes (sand all the way), no keys (in fact, no doors), nothing dangerous on land or in the sea, and – at the time of our visit in April – no mosquitoes. It doesn’t get much more carefree. And it’s all very attractive – both the built and the natural settings.

The tiny island can be circled in 20 minutes, walking on white sand all the way, with the sea and sky changing with circumnavigation. Pointy ngalawas (outrigger canoes) and stout dhows (sailing vessels) glide past on water so clear and blue it must be digitally enhanced. The bandas (bungalows), strung out along the edge of the beach amid natural forest, are large, lovely and private, with palm-thatch roofs, woven floors and a beach-safari style that’s cool-contemporary with a twist of old Zanzibar. The absence of doors and windowpanes allows breezes and the gentle shushing sound of sea on sand to enter the suites, including the generous bathroom wings.

The lounge/bar features more attractive reed floor coverings (woven newly onsite each year by a team of locals) and dramatic chunks of bleached coral rock forming walls. The adjoining dining deck takes full advantage of the glorious panorama of sand, sea and sky. It’s here that breakfast and lunch are taken, while dinner is on the sand beneath the stars. The chefs produce amazing fare that’s fresh, flavour-packed and fun. Seafood is bought from the fishermen on the beach each morning and is showcased in simple, successful dishes such as fennel-steamed fish with handmade noodles and stir-fried vegetables. While there is a menu, guests can also order to suit.

Cheeseburger? No problem. Lobster and Champagne for breakfast, lunch and dinner? It’s been done. A Chinese American craved dim sum one evening and, after an all-nighter with much Googling, the kitchen produced dim sum. Then there are the extraordinary sea safari experiences: excellent diving, swimming with dolphins, snorkelling with a curtain of yellow-and-black Moorish idols glinting in the sun, and a platoon of sergeant majors gliding by. The resort staff oversees one of the last turtle-protection sites in Zanzibar, tagging the massive creatures, protecting nests and chaperoning hatchlings to the water.

So it’s not uncommon to be able to watch a turtle over a metre long lay her eggs, laboriously flip sand over them, then tractor slowly back down to the sea in the moonlight. No wonder some guests stay a month; one from Milan is clocking up her 22nd visit this year. As with all &Beyond properties, there is something about the combination of superb settings and service (including massages and mani-pedis in the wild), outrageous comfort and conservation, and a spot of shopping. What’s not to love?