One wish on an African safari: How about five 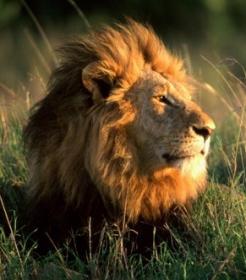 KRUGER NATIONAL PARK, South Africa - Some people on safari get so obsessed with seeing the "Big Five," they overlook the bush's raw beauty and less famous animal inhabitants. I am one of those people. The obsessive-compulsive part of me says that if I don't lay eyes on those five fearsome creatures - elephant, rhinoceros, lion, leopard and buffalo - my safari experience somehow will be incomplete, unfinished. 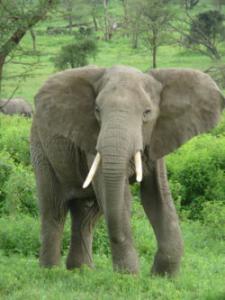 Silly, I know. But so is refusing to get off the treadmill until the time display says 30:00 instead of 29:59, and I do that, too. So here I am in South Africa, with less than 48 hours to spend on safari in the sprawling Sabi Sabi private game reserve next to Kruger National Park. That's not a lot of time to bag the Big Five, a name given by hunters to the most difficult and dangerous animals to kill.

"The most elusive is the leopard, but we'll see what we can do," promised the ranger, Brett Heasman, 24, a former semipro rugby player from Johannesburg who now leads khaki-clad tourists on safari. With cameras and binoculars dangling from our necks, our small group hopped into the open-air Land Rover while Heasman strapped a shotgun to the dashboard. Meanwhile, our "tracker," a member of the Shangaan tribe, climbed into his seat: a vulnerable little perch welded to the grill of the car. His job is to scour the dirt road for animal prints - and serve as the amuse bouche if we stumble upon a ravenous leopard.

As we set off on our bumpy ride under the late afternoon sun, I felt as excited as a little kid on an Easter egg hunt. Except the eggs we were looking for could maul or trample us to death. Barely 15 minutes had passed before we hit pay dirt: a couple of white rhinos, which, it turns out, aren't white at all. Heasman killed the engine and we sat in silence, watching the massive mammals wrap big square lips around mouthfuls of grass.

One down, four to go.

We celebrated the shift change between the sun and moon by pulling over for a fantastic safari tradition: the sundowner. Heasman yanked out a cooler, mixed a few gin and tonics and poured some creamy drinks made from the sweet marula fruit. By now it was nighttime, and that's when the predators come out to prey. In nearby Kruger, cars have to be off the road by now. But night drives are allowed in private game reserves like Sabi Sabi. Our tracker scanned the dense bush with a spotlight, looking for signs of life. We found it in the form of a pride of lions.

Oblivious to the clicks of our cameras, the big cats casually lounged around, resting up before a night spent terrorizing wildebeests and impalas. It was time for us to eat, too. We headed back to the lodge to join about three dozen other guests for a buffet dinner under the stars, featuring a few of the same animals we'd just seen. Being at the lodge doesn't mean you're out of the wild - a fact you're reminded of when staff members escort you to and from your room after nightfall. Game drives typically take place around dawn and dusk, when the animals are most active and the heat is less oppressive. So the next morning started bright and early with a wakeup knock on my door at 5:30 a.m. After a quick coffee and croissant, it was back in the Land Rover for what I hoped would be a date with Nos. 3, 4 and 5.

"You guys feeling adventurous- " Heasman asked. He grabbed his shotgun and told us to get out of the car and follow him slowly, single file. We walked up to a giraffe, staring at us under Liza Minnelli-long eyelashes. Giraffes don't mean squat when it comes to a Big Five tally, but it was a real rush to get this close to an animal this big and not be in Lincoln Park Zoo. Heasman spotted some leopard tracks, so we took off in hot pursuit. But after an hour's drive, still no spotted cat. 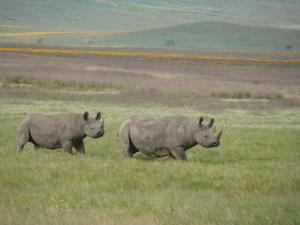 The Land Rover's CB radio started to crackle. Heasman picked it up, said a few words in Shangaan and turned to me with a big smile. "Time for a little happiness before we head back to the lodge," he said, turning the car around. We arrived at a clearing to find a large male leopard, unfazed by a pair of safari trucks flanking it. Heasman stopped our car 15 feet away (read: a short pounce) from the massive cat. I was literally in the shotgun seat, close enough to see the different shades of green in its heavy-lidded eyes.

The leopard let out a big Apolo Anton Ohno yawn, giving us a peek at its intimidating teeth. "This guy's really good about posing for photos," Heasman whispered. "He's been all over the Discovery Channel." The leopard stood up, had a stretch and sauntered straight at us, with that same chilling look Padma Lakshmi gets when she tells "Top Chef" contestants to please pack their knives. "Remain seated," Heasman said, in case I'd lost my mind. No. 3 sashayed past the car and then disappeared into the bush. If an experience like this doesn't make you feel like a kid again, nothing will. Three down, two to go.

We ran into No. 4 later that afternoon in a meadow. A herd of hungry Cape buffalo was gorging on grass. These protagonists in the wildly popular "Battle at Kruger" You Tube video (55 million views and counting) looked slightly ridiculous with their curly horns, like linebackers wearing colonial wigs. We only had one morning game drive left before catching a plane to Johannesburg, which meant one more chance to satisfy my obsessive-compulsive craving for No. 5. Dawn came and we drove. And drove. And drove some more.

Saw some beautiful birds. More Cape buffalo. More giraffes. Zebras. Zero elephants. "Four out of five ain't bad," said one of the more positive-thinking safarigoers. But Heasman clearly wanted to deliver that giant tusked animal to us. I got the sense he didn't get off the treadmill until it read an even 30:00, either. With less than an hour left, Heasman picked up speed. We cruised down a long, undulating dirt road before coming to an abrupt stop. Green leaves were rustling. I could see a thin tail wagging in the bushes. Heasman inched the car closer.

"There's your elephant," he said, with a mix of 20 percent pride and 80 percent relief. The largest land animal on the planet wrapped its wrinkled trunk around a thick tree branch and snapped it like a matchstick, shoveling the leaves into its mouth while flapping ears the size of patio umbrellas. Four out of five ain't bad.

Five out of five is perfect.

Information for this article was gathered on a research trip sponsored by South African Tourism.